Hey there, college basketball fan. How’s that bracket coming along? With only 16 teams left, you’re probably still losing in the office standings to that person who picked winners based off the team mascots.


Damn you, Jordan. Damn you.

For those of us who already watched our teams suffer tough defeats, the remainder of the tournament is all about the upsets, buzzer-beaters and – for the marketers, at least – the clever advertising.

“March Madness” is a billion dollar enterprise, and features ad campaigns that rival the likes of the Super Bowl. Still, for the unlucky brands without pockets deep enough to get a taste of the action, navigating the tricky waters of the NCAA and its trademark policy can be treacherous. We mapped out the similar situation that took place with The Olympics last summer.

You don’t have to be a sports junkie to recognize the heavy-hitting phrases that fall under the protected property of the NCAA. Using the term “March Madness” is an obvious no-go, as are the various rounds of the tournament – “Elite 8” (and “Elite Eight”) and “Final 4” (and “Final Four”). “Sweet 16” (along with “Sweet Sixteen”) also falls under the NCAA’s control, though it was originally trademarked by the state of Kentucky for high school basketball. It gets licensed to the NCAA for use.

Here’s a complete list of trademarks by the NCAA.

Then again, you could always push forward with your own ad copy and not worry about the repercussions. I’m sure the NCAA’s cease and desist letter will spell out the rules carefully.

Bottom line: the NCAA isn’t messing around when it comes to defending the brand. Known for possibly being the least fun sports organization of them all, those who govern collegiate athletics aren’t keen on others cashing in without their consent. That goes for advertisers and the athletes themselves.

While these rules are pretty ironclad, one would think the best brands on social would find fun workarounds. After all, capitalizing on a trending topic is one of the tools of the trade when it comes to advertising. Unfortunately, even some of the top accounts are steering clear of the tournament if they aren’t already a licensed advertising partner.

Unless you’re Capital One (love the “Steaks on a Plane” spot), or Buffalo Wild Wings (Wings, Beer, Commercials!), then you’re probably not mentioning hoops at all in your copy.

Surprising omissions include some of my personal favorite brands, like Taco Bell, Arby’s and Oreo – the latter, which has the opportunity to infiltrate using the word “dunk,” has a non-basketball-themed campaign running, though it does feature legendary big man Shaquille O’Neil, as well as noted basketball icon Christina Aguilera.

Brands with a little more wiggle room – like my favorite local chain, Ledo Pizza – have flexed those creative muscles and followed along with the tournament using screenshots and hashtags. 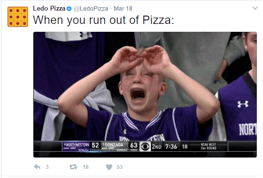 And not to be outdone, my favorite frozen pizza company (I like pizza, OK?), DiGiorno, got in on the action as well, though they teetered a fine line without crossing into any grey area. McDonald’s even pushed the envelope a bit too, although the graphic itself isn’t terribly compelling.

While it’s understandable that the NCAA wants to protect its brand and capitalize financially off of things in the process, there are a few people who suffer along the way. The first group – the players themselves – is a subject of debate already. The obvious second is the consumer.

Without a little more freedom to join the “March Madness” conversation, we’re simply left with Samuel L. Jackson, Spike Lee and Charles Barkley oversaturation. And while some may like Capital One’s three-headed spokes-celeb, it does leave a bit of room to wonder what could be.