Remember that high school classmate you knew was going to do something great? That guy with the perfect SAT score? That girl headed to Harvard in the fall?

We all knew that person who had all the potential in the world. That’s why it’s all the more depressing when you see things didn’t quite turn out the way you thought for them a few years later.

A friend of mine working in Silicon Valley recently used this analogy to describe the social network I’d long hoped would be the one that outlasted the rest, Twitter.

Twitter had a lot going its way – plenty of capital, a team of ambitious executives, and a growing user base headlined by celebrities, brands and politicians.

A decade later, Twitter’s monthly active user count is stagnant, what seems like hundreds of fake accounts are popping up every day, and conversations have mostly turned to political fodder (dare I say, “fake news?”). And don’t get me started on timelines and how they have become less…timely.

Twitter has certainly changed over the years. Earlier this week, founder and CEO Jack Dorsey announced quite possibly the company’s most extreme development – the 280-character count tweet.

It seems the social network that once forced its users to slim down their posts in an effort to match its original SMS character limit has plans to double the size of a tweet.

“Twitter is about brevity,” product manager Aliza Rosen and senior software engineer Ikuhiro Ihara wrote in the company’s blog post announcing the proposed character increase. “It's what makes it such a great way to see what's happening. Tweets get right to the point with the information or thoughts that matter. That is something we will never change.”

Except, that’s exactly what Twitter did. Sure, 280 characters doesn’t qualify as a novel, but for the sake of “brevity,” a 100 percent increase in character count is ENORMOUS.

In the blog, Rosen and Ihara point to tweets written in Japanese – a language with many characters for words, rather than letters – noting that their research shows the character limit is a “major cause of frustration” for those tweeting in English. Perhaps there is something to be said for the language argument, but to label it not “fair,” as co-founder Biz Stone said in his own tweet about the change, could be a stretch when speaking about a social networking platform.

Twitter selected a small group of users to test the change. Many responses have been less than favorable.

Dorsey re-tweeted the screenshot below, which takes a red editing pen to his announcement tweet, proving that “brevity” may indeed be dead on the platform. 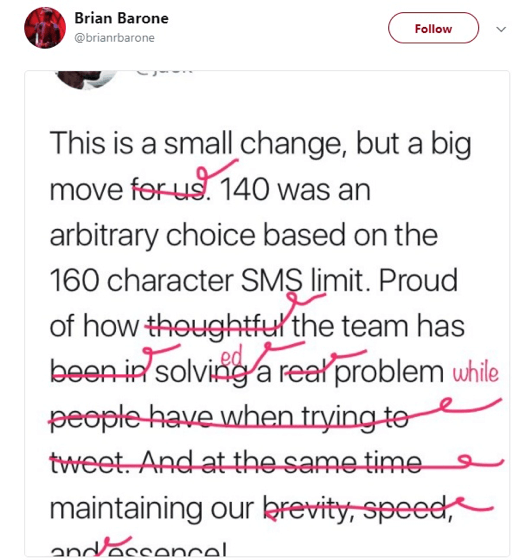 The Muppets used their new character count limit for good.

But then this annoying thing happened.

Twitter claims its team solved a “real problem.” A lot of users really wonder if that’s true, or if the company was simply looking for a drastic shake-up – an effort to get in the news, draw people to the platform or break the company mold.


A “real problem” on Twitter would be a more active approach to removing hate speech, interference bots from nefarious foreign operators, and more. Instead, it seems the company has simply given these users more ammo to cause disruption.